Putting the future of flying to the test 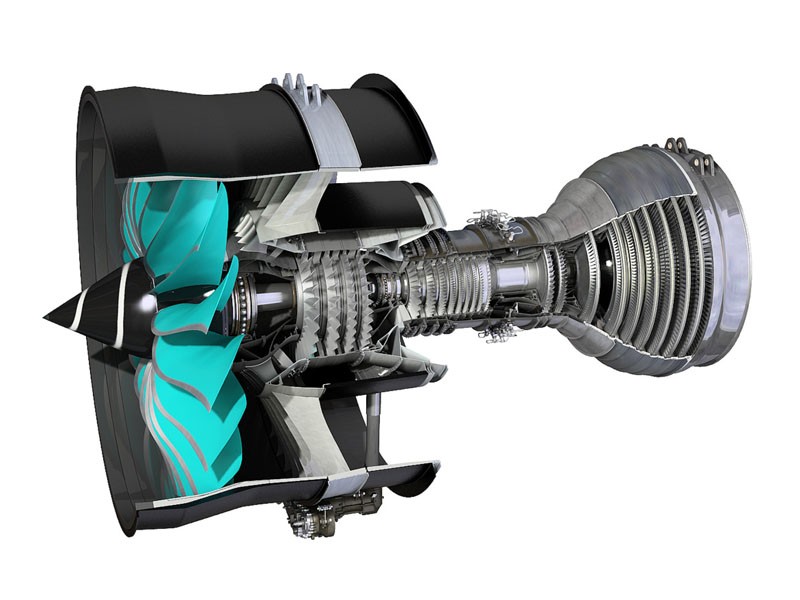 A gearbox can efficiently transfer the output of the quickly rotating turbine to the slowly rotating fan. (Image: Rolls-Royce plc)

The world’s most powerful aerospace gearbox will go into service in 2025: It is part of the Rolls-Royce UltraFan design and will transfer up to 100,000 hp. In a project supported by the German federal government, scientists at the Technical University of Munich (TUM) are investigating how the gearbox’s properties vary according to size and how they can be optimized.

This gear-based transmission has a central function. Put simply, less fuel is consumed when the fan, the part of the engine visible from the outside, rotates as slowly as possible while the turbine inside the engine rotates as fast as possible. "A gearbox can efficiently transfer the output of the quickly rotating turbine to the slowly rotating fan," says Seydel. The UltraFan’s gearbox is being dimensioned to transfer up to 100,000 hp, equivalent to the power output of 500 medium-sized cars. This makes it the most powerful gearbox ever made for civilian aviation.

Together with his team, TUM Machine Elements professor Karsten Stahl has many years of experience investigating and optimizing the special properties of gear transmissions. As a result Rolls-Royce decided to engage TUM as its partner for the federally funded project, which will face a number of challenges.

"At its original size, the gearbox has a diameter of one meter. Special challenges emerge when you build a gearbox as large and compact as the one necessary for the UltraFan, for example with regard to cooling," Stahl explains. The gearbox generates several hundred kilowatts of thermal output, enough to heat a high-rise building.

Several megawatts of power in the system

The researchers are investigating the corresponding interactions of the special gearbox properties with special calculation methods and simulation models. The calculated results are then verified using a testing station designed and developed by the scientists in a separate research project. The first challenge they faced was reducing the size of the gearbox, whose tests on a 1:1 scale at the manufacturer filled an entire building so that it could be investigated in the TUM testing facilities, without losing the properties to be studied.

The next challenge was the energy supply: In spite of the size reduction it would still be necessary to transfer several megawatts to the gearbox. Using conventional testing technologies this would require enormous electric motors. In order to reduce the installed capacities and thus the installation space and associated costs, the scientists constructed the testing station using what is known as the back-to-back principle. Here two identically constructed gearboxes are inverted and connected to one another in a mirrored arrangement, so that the output energy of one gearbox is routed to the input energy of the other. "This means we can produce several megawatts of power in the system with a relatively small amount of power, only about 200 kilowatts," says Uwe Weinberger, project manager at the TUM chair.

Sensors constantly record performance data on the test gearbox, including parameters such as acceleration, rotation speeds, torque, input and output oil temperatures, temperatures at bearings and seals as well as oil pressure. "The approximately 100 measurement channels produce so much data that we’re really entering the range of Big Data," says Weinberger. "In order to evaluate the data points and correlate them with one another, we first have to develop automatic evaluation and reduction methods that then let us compare results and draw conclusions." Gearboxes with systematically varied properties will be investigated in the upcoming months; the researchers will then use the results as a foundation for making specific recommendations on the optimization of the gearbox in original size.

The optimized gearboxes will then be tested on a 1:1 scale at the Rolls-Royce testing facility in Dahlewitz near Berlin. "This will of course be followed by tests in the engine, first on the ground, then in the ’Flying Testbed’, a specially modified aircraft," Christian Seydel explains. The UltraFan aircraft engine is to available to the civil aerospace market by 2025. Until then the TUM scientists will continue to contribute their research in support of development activities.