A sharp look into the nucleus of a quasar 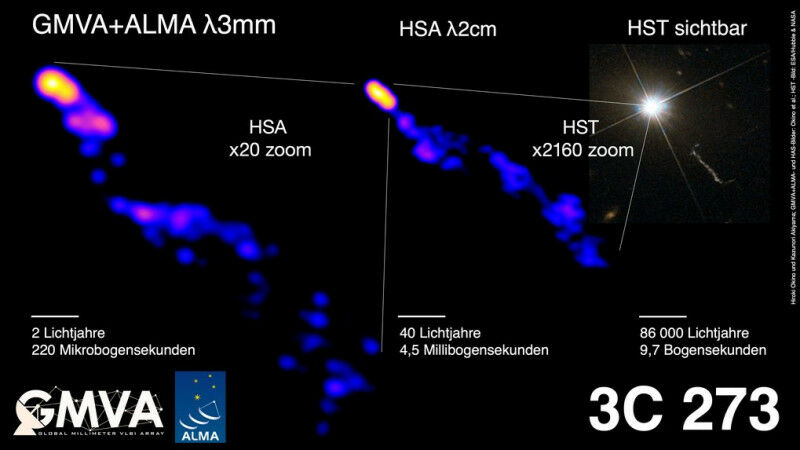 Zooming into the center: The left image shows the deepest view yet into the plasma jet of quasar 3C 273, allowing a closer look at how the jet is focused. This extends hundreds of thousands of light-years beyond the galaxy, as seen in the optical image on the right, taken by the Hubble Space Telescope. The researchers used radio images at different wavelengths and angular resolutions to measure the expansion of the entire jet. The radio interferometers used here are the Global Millimeter VLBI Array (GMVA), the Atacama Large Millimeter/submillimeter Array (ALMA), and the High Sensitivity Array (HSA). © Hiroki Okino and Kazunori Akiyama; GMVA+ALMA and HSA images: Okino et al; HST image: ESA/Hubble & NASA.

At the core of almost every galaxy is a supermassive black hole. But there are many different types. Quasars, for example, are one of the brightest and most active varieties of galactic centers. An international group, including researchers from the Max Planck Institute for Radio Astronomy in Bonn, Germany, presents new observations of the first quasar ever identified. This "quasi-stellar object," named 3C 273, is located at a distance of about 1.9 billion light-years toward the constellation Virgo. The radio images trace the jet down to its origin and show how the width of the jet varies with increasing distance from the central black hole.

Active supermassive black holes emit narrow, incredibly energetic plasma jets. These shoot out of the centers of galaxies at nearly the speed of light. "Radio jets in quasars have been studied for a long time, but the details of jet formation are still not well understood and are a current topic of ongoing research," says Thomas Krichbaum of the Max Planck Institute for Radio Astronomy in Bonn. For example, he says, the question of how and where exactly the jets are bundled into a narrow beam so that they can propagate far beyond the boundaries of their host galaxy remains unsolved. In the process, these jets can even influence the evolution of galaxies. The new radio observations penetrate up to half a light-year deep into the heart of 3C 273 - to the region near the black hole. There, the jet plasma stream is bundled into a narrow beam," says Krichbaum.

In fact, the researchers were able to look into the engine room of the quasar, so to speak. In doing so, they found that the opening angle of the plasma jet flowing away from the black hole is slowly narrowing. This narrowing portion of the jet continues well beyond the region where the black hole’s gravity dominates. "It is amazing to see the shape of the powerful plasma stream in an extremely active quasar change slowly and over a large distance. This has also been observed near much fainter and less active supermassive black holes," said Kazunori Akiyama, a researcher at MIT’s Haystack Observatory and project leader.

According to Hiroki Okino, a doctoral student at the University of Tokyo and the National Astronomical Observatory of Japan, the results raise a new question: "How is it that the clustering of jets in such different black hole systems is so uniform?" For decades, 3C 273 has been considered an ideal nearby laboratory for studying quasar jets. But although the quasar is relatively close, there have been no instruments that penetrated far enough into the center - and with high detail resolution.

The observations have now been made possible by a network of radio telescopes around the globe, the combination of the Global Millimeter VLBI Array (GMVA) and the Atacama Large Millimeter/submillimeter Array (ALMA) in Chile. The GMVA and ALMA were linked across continents using a technique called Very Long Baseline Interferometry (VLBI). Also involved in the measurements was the ,,High Sensitivity Array" (HSA) with the goal of determining the expansion and shape of the jet even at larger distances from the quasar core. The data were recorded in spring 2017. The Max Planck Institute for Radio Astronomy is in charge of operating the GMVA. Thus, the observations are coordinated and the data processed in Bonn.

The addition of ALMA to the global VLBI networks marks a turning point in black hole research," says Anton Zensus, director at the Max Planck Institute for Radio Astronomy and co-author of the study. This makes it possible for the first time to obtain images of supermassive black holes, he said. In addition, the technique helps to study objects like 3C 273 in detail and to observe how black holes drive their jets, even in distant galaxies.

recruit.myScience
f
Share
Like
Related Stories
Astronomy / Space Science
Building blocks of life would be technically detectable in our solar system - 02.12
Deepest look yet into the heart of a quasar - 28.11

Detecting defects in semiconductors at the atomic level - 01.12

A sustainable path for energy-demanding photochemistry - 01.12
This site uses cookies and analysis tools to improve the usability of the site. More information. |