CRC 1349 ’Fluorine-Specific Interactions’ Gets the Go-Ahead

In accordance with wishes of the organizations and representatives of the groups concerned, burial will be non-religious and non-Eurocentric. A burial is currently being planned for the human remains that have been uncovered in the course of several excavations on the Freie Universität Berlin campus since 2015.

The European Network of Academic Sports Services (ENAS) has awarded the "UniSport-O-Mat" project, created by the University Sports Center (UniSport) at Freie Universität, with the 2022 ENAS Award. The award, which includes 2000 euros in prize money, is presented annually for particularly innovative ideas relevant to the field of university sports in Europe.

’No Means No - Together against Sexualized Violence’

Campaign at Freie Universität Berlin will address the issue of discrimination and violence against women, November 22-25, 2022. In honor of the International Day for the Elimination of Violence against Women, Freie Universität Berlin will be organizing a campaign titled "No Means No - Together against Sexualized Violence" from November 22 to 25, 2022.

Lecture and Screening: ’The Image as Affective Milieu: Mood, Medium and Environmental Aesthetics’ by Inga Pollmann

Public Film Screening and Lecture in English by Film Scholar Inga Pollmann on November 22, 2022, at the Arsenal Cinema in Cooperation with Cinepoetics - Center for Advanced Film Studies. On November 22, 2022, the American film scholar Inga Pollmann will hold a public lecture at the Arsenal cinema in Berlin, entitled "The Image as Affective Milieu: Mood, Medium, and Environmental Aesthetics." She will explore the question of what it would mean to conceive of the film image as affective milieu. 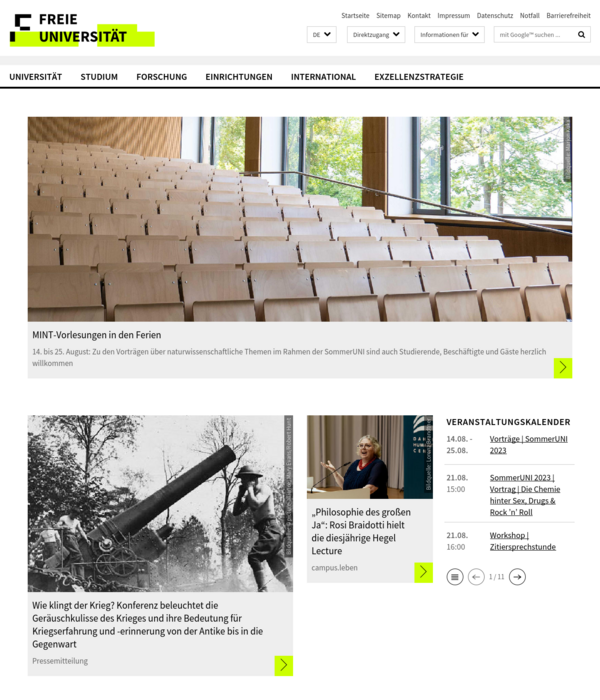