At the interface between art and mathematics 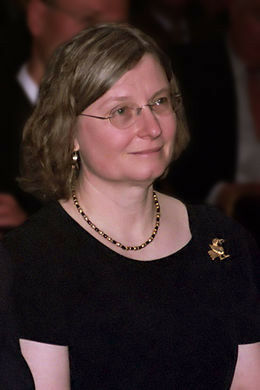 The German Mathematicians Association (DMV) and the Westfälische Wilhelms-Universität Münster (WWU) invite you to a lecture on the intersections between art and mathematics on Saturday, 24 October, at the Erbdrostenhof in Münster.

The renowned mathematician Ingrid Daubechies from Duke University in North Carolina, USA, will speak under the title "Gauss in Münster - Mathematics Helping Art Conservation". In her lecture in English, she explains how mathematical algorithms help art historians and conservators to restore masterpieces from the 14th and 15th centuries. Examples include the wooden paintings on the Ghent Altar in the Belgian city of Ghent and altarpieces from the North Carolina Museum of Art, USA. The DMV’s 26th public Gauss Lecture begins at 3.15 p.m. in the Festsaal of the Erbdrostenhof, Salzstraße 38.

Before the main lecture by Ingrid Daubechies, Michael Röckner, Vice President of the DMV, and WWU Rector Ursula Nelles will welcome the audience. This was followed by a short talk by Dr Christoph Pöppe, editor at the magazine "Spektrum der Wissenschaft", and an introduction to the topic of the main talk by Prof. Dr Wolfgang Dahmen from the Rheinisch-Westfälische Technische Hochschule Aachen. Maren Clara Paterok (flute) and Risa Adachi (grand piano) will provide the musical framework.

In the series "Gauss Lectures", the DMV offers an overview lecture twice a year with a renowned subject representative. The lecture is intended to publicly demonstrate the scientific development of the subject. Universities can apply to host this lecture. The Gauss Lecture will now take place in Münster for the second time after 2004 at the invitation of the science centre "DEMAIN". "DEMAIN" is an abbreviation for "Developing Mathematics in Interaction". The network at the WWU is intended to promote the exchange between mathematicians and natural scientists and to strengthen the cooperation between theoretical and applied mathematics.

Ingrid Daubechies, born on 17 August 1954 in Belgium, is a mathematician who has received many awards and is internationally known in specialist circles for her groundbreaking research in the field of so-called wavelets. These mathematical functions, some of which were even named after her, are not only important in mathematics, but also in engineering and the natural sciences.

One example of application is functional magnetic resonance imaging, an imaging procedure to make physiological processes visible inside the body. Other applications arise, for example, in geophysics and art science.