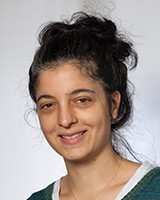 Heidelberg researcher Şevin Turcan, an expert in biomedical engineering, is the recipient of the 2018 Hella Bühler Prize, which is endowed with 100,000 euros. The prize is aimed at young researchers in Heidelberg whose outstanding cancer research has garnered well-deserved attention. The prize monies are used to further advance their innovative research. Dr Turcan works at the National Center for Tumor Diseases (NCT) Heidelberg researching the biology of gliomas, specific brain tumours of the central nervous system. Heidelberg University will hold the awards ceremony on 29 November 2018 and the public is invited to attend.

‘evin Turcan (b. 1980) studied biomedical engineering at Johns Hopkins University in Baltimore as well as Tufts University in Medford (both in the USA), where she also earned her doctorate with her thesis on the postnatal development of the mouse inner ear. As a postdoc she joined Memorial Sloan Kettering Cancer Center in New York in 2010 before moving on to the NCT in 2016. In the Department for Neurology at Heidelberg University Hospital, she directs a Max Eder junior research group at the NCT with funding from German Cancer Aid. She and her team study the role of so-called IDH1 mutations in the formation of malignant gliomas, in particular the deregulation of transcriptional networks in IDH1-mutated gliomas. Dr Turcan has received several fellowships and awards for her work.

President of Ruperto Carola Bernard Eitel will open the Hella Bühler Prize award ceremony. Heidelberg medical researcher and previous award-winner Dr Matthias Osswald will provide a look back, followed by the address in honour of Dr Turcan by Wolfgang Wick, Executive Director of the Neurology Clinic and Head of the Neurooncology Clinical Cooperation Unit. Dr Turcan will then offer the audience some brief insights into her current work. The event at the International Academic Forum of Heidelberg University, Hauptstraße 242, begins at 4:30pm.

The research prize, endowed by Heidelberg dentist Dr Hella Bühler (1910 to 2002) is aimed at supporting young Heidelberg researchers to continue and deepen their ongoing excellent work in the field of cancer research.