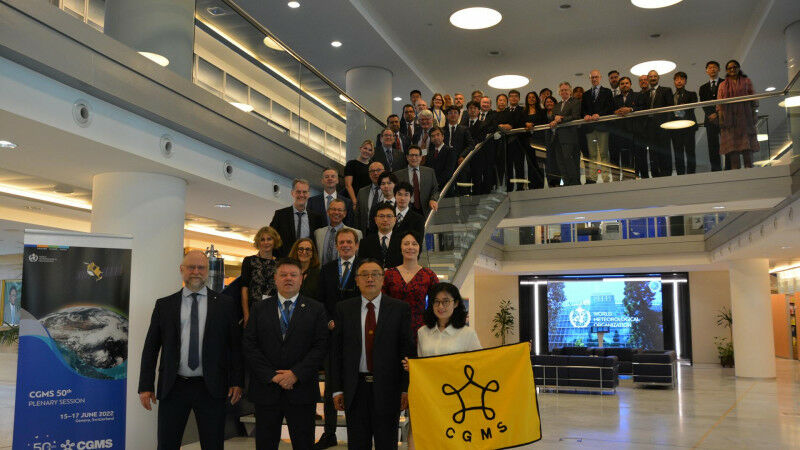 The Coordination Group for Meteorological Satellites (CGMS ) consists of satellite agencies from China, Europe, India, Japan, Republic of Korea, Russia and the United States, as well as international users including the World Meteorological Organization (WMO) and the Intergovernmental Oceanographic Commission (IOC) of UNESCO.

Space agency heads have delivered congratulatory messages for the 50th anniversary ceremony on 17 June at WMO headquarters. The event will showcase the benefits of coordinated space-based observations based on the principal of working together. Participants will also look ahead to challenges in an era of threats of disruption from solar related "space weather" and growing pressure on scarce radio frequencies used for meteorological purposes; as well as to opportunities provided by supercomputers, IT cloud technology and Artificial Intelligence.

"In order to meet the expectations from governments, industry, and citizens for improved weather forecasts and early warnings of high impact weather events, the key priority of the CGMS is to continuously deliver high-quality and increasingly accurate observations from space," says Phil Evans, EUMETSAT Director-General and head of the CGMS Secretariat.

"A globally coordinated response is necessary, and mechanisms like the CGMS will play a key role in this," he says.

CGMS was established in 1972 by satellite agencies from Europe, Japan and the United States in order to coordinate the operation and use of fledgling geostationary satellites. Over the years, the membership and remit have expanded to cover an ever-growing number of weather, climate, ocean and environmental monitoring applications.

CGMS has more recently added coordination of climate and greenhouse gas observations as well as space weather (related to solar activity) to its priority areas of activity for the coming decade.

"The power of partnerships is pivotal and will be even more so in future as we embrace an Earth-systems approach to forecasts and predictions," says WMO Secretary-General Prof. Petteri Taalas.

"Satellite observations have greatly increased our understanding of what is happening in our atmosphere, in remote parts of the planet and deep in the oceans. We can predict storm tracks and precipitation patterns and monitor drought and wildfires. This underpins our efforts to strengthen disaster resilience and response and support decision-making on climate change mitigation and adaptation," he says.

"CGMS exemplifies the international cooperation which is needed to realize the WMO Integrated Global Observing System as well as initiatives to increase access to early warning systems and to strengthen monitoring of greenhouse gas emissions," he says.

Meteorological eyes in the sky

Over the years, the coverage of the "meteorological eyes in the sky" has become all-encompassing to include polar and elliptic orbit observations, in addition to geostationary satellites.

Joint collaboration between Europe, the US, and China enabled the expansion the constellation of international polar orbiting meteorological satellites from a two-orbit to a three-orbit system. In the past, EUMETSAT and NOAA operated mid-morning and mid-afternoon orbits and observations have now been greatly enhanced by an early-morning orbit from China’s polar orbiting satellites.

Combined, this three-orbit satellite system is able to provide more observations of everything from severe weather events, to forest fires, to ocean surface winds. Polar orbiting meteorological satellites are vital for global numerical weather prediction models as they provide around 90% of the satellite data used for reducing errors in forecasts.

CGMS standardizes processing and distribution of data to serve global users, in particular the WMO community. In addition, the development of global standards for metadata for satellite data and products have significantly improved the exchange of data between partners.

One of the overriding achievements of CGMS is the Establishment of a global back-up framework (contingency planning) - the concept of "helping thy neighbour."

In the event of failure of one member’s assets, CGMS members have supported each other by moving satellites from their nominal positions in order to ensure continuity of observations over another part of the globe.

The same philosophy of "satellites serving society" characterizes many of CGMS-related activities.

Looking at the geostationary satellites as an example, EUMETSAT satellites help keep an eye on the Indian Ocean , providing data crucial for Indian Ocean islands and for eastern Africa and complementing the satellites of China, India, Japan, and the Republic of Korea. Japan’s Himawari-8 has brought the power of new satellite data to the Asia-Pacific region and China’s F-4 satellite provides additional unprecedented information about the same region.

"We have the privilege and unique advantage of acting on behalf of a well-structured, user-driven community responsible for facing global challenges that will impact future generations. Let’s act together and deliver!" says Phil Evans, head of the CGMS Secretariat.