Getting closer to the energy storage systems of tomorrow 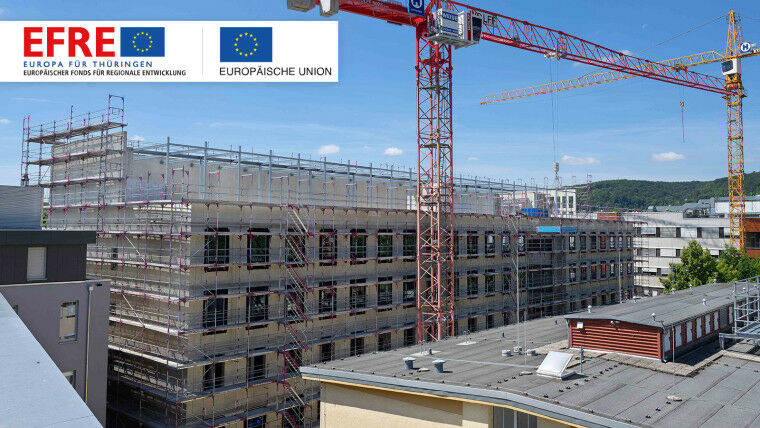 View of the extension buildings of the Center for Energy and Environmental Chemistry (CEEC Jena). Photo: Jens Meyer (University of Jena)

Research into the batteries or energy storage systems of the future is one of the focal points of Friedrich Schiller University in Jena. Since the innovative ideas had run out of space, additional buildings became necessary. For two extensions of the Center for Energy and Environmental Chemistry (CEEC Jena) topping-out ceremony could be celebrated today.

For about a year now, the two new research buildings CEEC Jena II and the CEEC Jena Application Center (AWZ CEEC Jena) have been constructed by the university as the building owner - despite the corona pandemic within the planned time frame. The approx. 54 million euro project is financed by the federal and state governments with funds from the European Regional Development Fund (ERDF) and with support from the Ernst Abbe Foundation, the Carl Zeiss Foundation and the Friedrich Schiller University of Jena. On a total of 4,000 square meters of main floor space, interfaculty buildings of the University of Jena are being built, where researchers from chemistry, materials and geosciences will work together. Among other things, the focus will be on new materials for the energy transition and the energy storage systems of the future.Energy storage is a key technology of the 21st century," said Thuringia’s Science Minister Wolfgang Tiefensee. The energy turnaround, as well as independence from fossil fuels, would not be possible without high-performance energy storage systems. This topic has taken on a whole new urgency with the Ukraine crisis and the curbing of Russian energy imports.In this situation, CEEC Jena is doing important pioneering work for battery research far beyond Germany. "

,,The University of Jena is associated with internationally visible cutting-edge research and innovative concepts for batteries and materials. With today’s topping-out ceremony, we are ensuring that this will continue to be the case in the future," said Friedrich Schiller University Jena President Walter Rosenthal. TheCEEC Jena does not only conduct research on electrochemical energy storage systems such as batteries and supercapacitors. Key technologies such as photovoltaics and water technology also play a role. The spectrum of research ranges from polymer chemistry to glass chemistry to mineralogy and from theory to the production and processing of new materials to applications," added the president.

These two new buildings will significantly strengthen the Friedrich Schiller University of Jena and especially the CEEC Jena, will raise synergies between the disciplines and will help to ensure that globally visible contributions to the energy transition and in the field of new innovative materials for energy storage and conversion are researched in Jena and later also translated into translations," says Ulrich S. Schubert, director of CEEC Jena.

,,The new construction of the CEEC Jena II and the Application Center is an excellent example of how we are further strengthening Jena as a beacon university location," said Infrastructure Minister Susanna Karawanskij.In recent years, the state government has made considerable funds available for Thuringia as a science location, and in particular for the University of Jena," the minister emphasized, also referring to the medium-term building construction plan until 2027, which was confirmed by the cabinet in February. This ensures a reliable construction perspective at the University of Jena, but also beyond that.

The design of the research building with over 40 offices and 60 laboratories was undertaken by the Munich-based architectural firm HDR. It based the new building on the existing CEEC Jena I building and created a direct link between the research facilities. It has also succeeded in installing laboratories for electron microscopy and other special methods in the basement, creating an experimental area for demonstrators on the roof and setting up a technical center for upscaling and coarse devices in the CEEC Jena AWZ.

And so, after completion, which is planned for the coming year, it will be possible to transfer the research results into a possible later production and to be able to produce larger quantities of the desired products already on site. According to Schubert, the AWZ CEEC Jena will also provide the basis for the establishment of another federal institute focusing on "polymers for energy storage and conversion".

A hint that Jena’s Lord Mayor Dr. Thomas Nitzsche was happy to hear. In his greeting, he had already pointed out that the city could not be imagined without the university. In addition to its achievements in research and teaching, the university is"also a very important player in urban development," the mayor said, looking forward to the university’s upcoming construction projects, which he was happy to support.

On the road to the super-battery - 08.06
Cooperation of LG Energy Solution, MEET Battery Research Center and Helmholtz Institute Münster starts - 07.06

Exciting science in the city center of Bonn - 27.07
Photo competition: join in!: The Communication and Public Relations Department is looking for photos of special WWU architecture - 06.07