Gold from Troia, Poliochni and Ur had the same origin 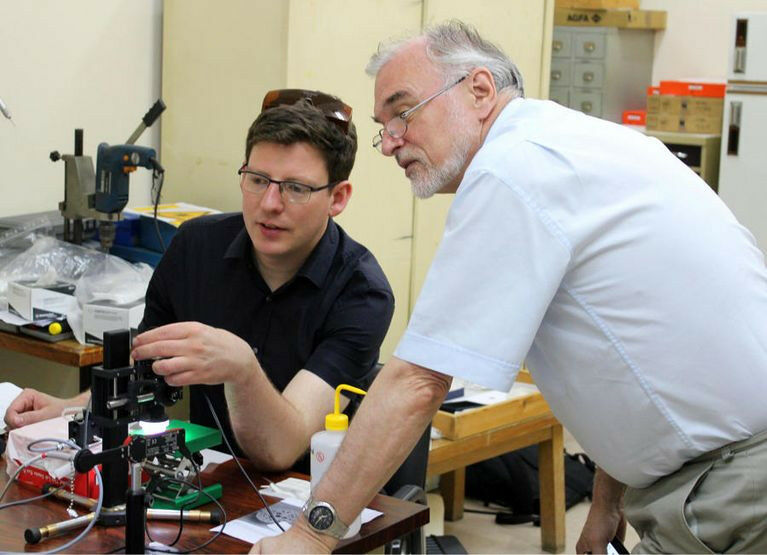 Pernicka (r.) and Moritz Numrich at work on the laser ablation machine at the National Archaeological Museum in Athens.

The gold in objects from Troia, Poliochni - a settlement on the island of Lemnos, located about 60 kilometers off the coast of Troia - and Mesopotamian Ur has the same geographical origin and was traded over long distances. This is the conclusion reached by an international team of researchers who used an innovative mobile laser method to analyze samples of famous Early Bronze Age jewelry from Troia and Poliochni for the first time. The results were published in the Journal of Archaeological Science. 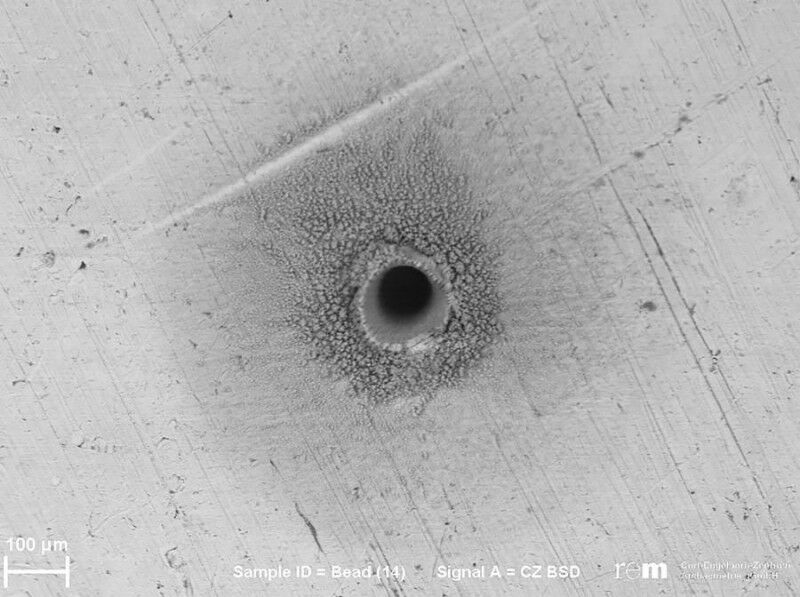 The hole that the beam of the portable laser device pLA melts into the surface of the gold pieces measures just 120 micrometers in diameter and is conical in shape. Only through an electron microscope can the damage to the gold object be seen.

Since Heinrich Schliemann found, among other things, the "Treasure of Priam" in Troia in 1873, the mystery of the origin of the gold has remained unsolved. Professor Pernicka and the international team have now been able to prove that it came from so-called secondary deposits such as rivers and that its chemical composition is identical on the one hand to that of gold objects from the settlement of Poliochni on Lemnos and from the royal tombs in Mesopotamian Ur, and on the other hand also to that of objects from Georgia. "So there must have been trade relations between these distant regions," said Pernicka.

The study was made possible by a portable laser (pLA) that allowed the team to take samples from jewelry at the National Archaeological Museum in Athens in a minimally invasive way. The museum’s necklaces, pendants, earrings and neck rings are so precious that they cannot be transported to a laboratory or examined in a way that would leave visible damage to the objects. Previously available methods failed to overcome at least one of these obstacles. The portable laser, on the other hand, melts such a small hole in the pieces for on-site sampling at the museum that it is invisible to the naked eye. Pernicka and his team were then able to use mass spectrometry at the Curt-Engelhorn Center for Archaeometry in Mannheim to analyze the samples for composition. 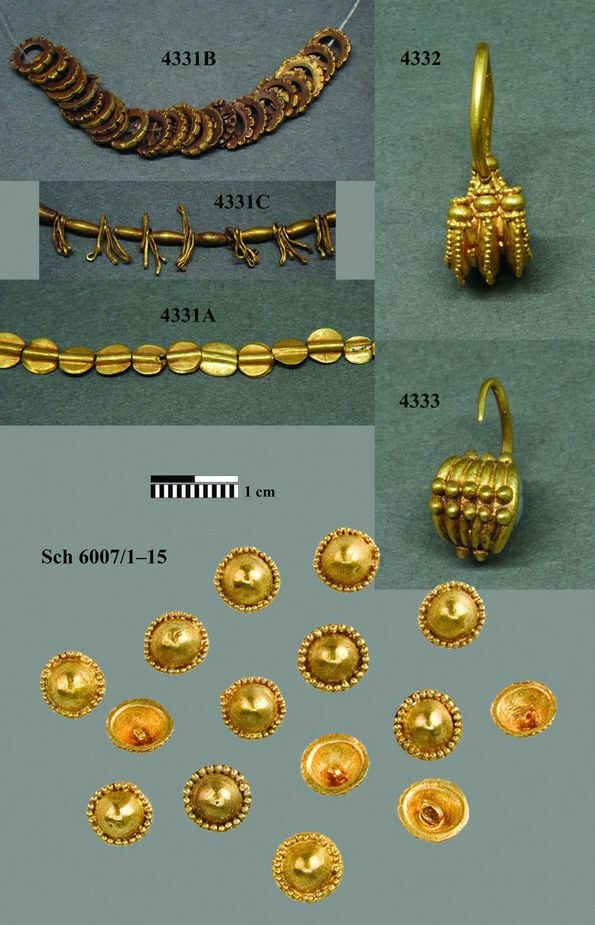 Necklaces (top left), earrings (top right) and brooches (bottom) were among a total of 61 gold objects from Troia examined by the international team of researchers.

In addition to gold, historical gold jewelry always contains other elements such as silver, copper, tin, palladium and platinum. Depending on the alloy, scientists can create a clear chemical profile from the findings and draw conclusions. For example, the high concentrations of tin, palladium and platinum in the Troia jewelry are a clear indication that the gold processed for it was washed from a river in the form of gold dust. The researchers were also able to prove that workshops produced jewelry in series and not just as individual pieces. Otherwise, for example, the identical proportion of platinum and palladium in the gold plates of necklaces of the same type, but which were found in different places, could not be explained.

The research team examined a total of 61 artifacts, all of which date from the early Bronze Age between 2,500 and 2,000 BC. This period also includes the famous "Treasure of Priam," which Schliemann had mistakenly attributed to the mythical king of Troy from the Iliad. 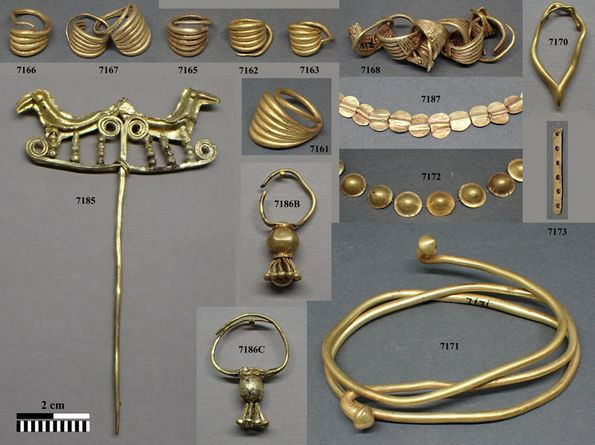 Hair rings (top left), a pin (bottom left), necklaces (center), and a choker (bottom right) were among a total of 26 gold objects from Poliochni on Lemnos examined by the international team of researchers.

The origin of the gold from the royal tombs of Ur had also been discussed among experts for decades. There are no natural gold deposits in Mesopotamia - which is why western Anatolia, where Troia was also located, has been suspected as a possible region of origin. However, there are other regions where there is evidence of active trade relations with Ur," says Pernicka. In the early Bronze Age, strikingly similar objects were used in a large geographical area from the Aegean to the Indus Valley in what is now Pakistan, as the archaeological comparative studies show: official seals and standardized weights, earrings with the same spiral patterns, gemstones such as lapis lazuli or the orange-white shimmering carnelian. "The new archaeometric data open up a solid and global framework for our models of societies, their networks and the importance of resources around 4500 years ago," says Horejs.

However, the researchers have not yet been able to clarify the exact origin of the gold from Troy beyond doubt, says Pernicka: "When we look at the proportion of trace elements in the gold from Troy, Poliochni and Ur, Bronze Age gold from Georgia shows the greatest correspondence with the sites mentioned. However, we still lack data and investigations from other regions and from other objects to substantiate this assumption. " 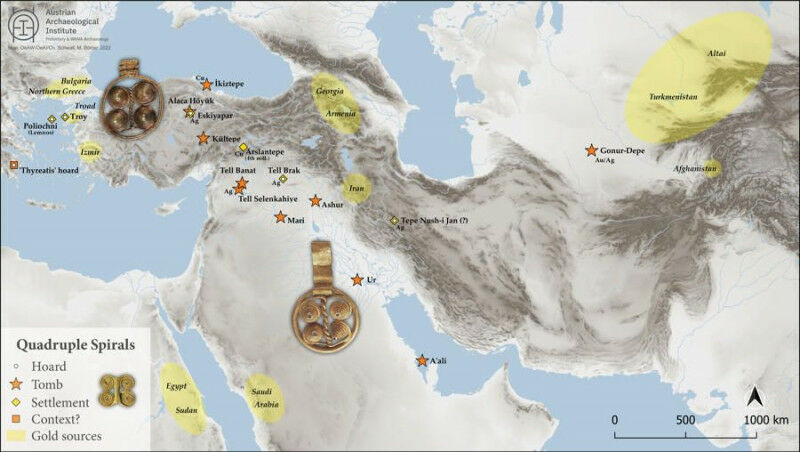 Known gold deposits in the Bronze Age and distribution of a striking earring with four small spirals.