Photo: Nadine Esche People automatically associate certain shapes with certain sounds.
How do our senses, like vision, hearing, and touch, work together to create the perception of the world around us’ A new study by scientists at Universität Hamburg finds that commonly found associations between shapes and sounds might rely on childhood vision. The results were published in the journal Psychological Science.

People of virtually all cultures and ethnicities, including ethnicities without a writing system, automatically associate certain shapes with certain sounds. Words with high-pitch sound (like "Kiki") are usually associated with angular and spiky shapes, whereas words with low-pitch sounds (like "Bouba") are associated with round and smooth shapes. Are these multisensory associations innate, or do we develop them over our lifetime? Furthermore, what role does the ability to see shapes in childhood play in the development of these associations?

The research group Biological Psychology and Neuropsychology, headed by Brigitte Röder, tackled these questions in the new study. The overarching concept behind studies like these is the existence of sensitive periods in development. In sensitive periods, the developing brain is especially receptive for learning specific functions. After a sensitive period closes, certain functions become difficult or even impossible to acquire.

To investigate the existence of a sensitive period in the development of sound-shape associations, the team from Hamburg studied persons who were born with dense cataracts in both eyes and were therefore blind, but regained vision through cataract-removal surgery later in life. Another group consisting of persons who developed cataracts before the age of 12 and then regained vision also took part in the study. These individuals were not blind at birth, but experienced a phase of very low vision in their childhood before they regained vision. Additionally, persons who were permanently blind since birth or became completely blind only after the age of 12 took part in the study. Typically sighted participants took part as a control group.

The results: Unlike typically sighted participants, participants who were blind since birth did not show a systematic sound-shape association for touched shapes. Moreover, persons who were blind since birth, or suffered from a period of very low vision in childhood, did not show a systematic association between shapes and sounds, even after vision restoration and a long period of recovery. The results indicate a long sensitive period for the development of sound-shape associations.

In contrast, participants who became permanently blind after 12 years of typical vision showed a typical sound-shape association for touched shapes, like the typically sighted control group. The results indicate that associations learned in the sensitive period are not lost after this period even when drastic changes in the sensory systems take place.

"Our study plays an important role in understanding the interplay between the different sensory systems, and underscores the function childhood experience plays in brain development," says Suddha Sourav, doctoral candidate and first author of the study.

According to the researchers, the study could be a starting point for further investigations exploring the role of sensory experience in word formation-and how they might shape our languages. The researchers want to further investigate the mechanisms that make learning after the end of a sensitive period difficult or impossible. At the same time, they plan to explore how blindness might lead to a more efficient processing of sensory information in the remaining senses.

For this research work, Biological Psychology and Neuropsychology at Universität Hamburg cooperated with the LV Prasad Eye Institute in Hyderabad, India, a well-known center for vision restoration in India. The participants with cataract regained their vision through surgery in this institute. Similar research is exceedingly difficult to perform in developed countries, since cataracts in children are usually detected and extracted very early. 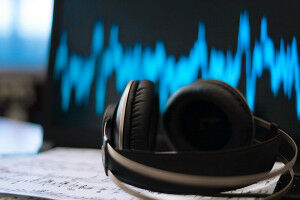