Safe singing in choirs during pandemics 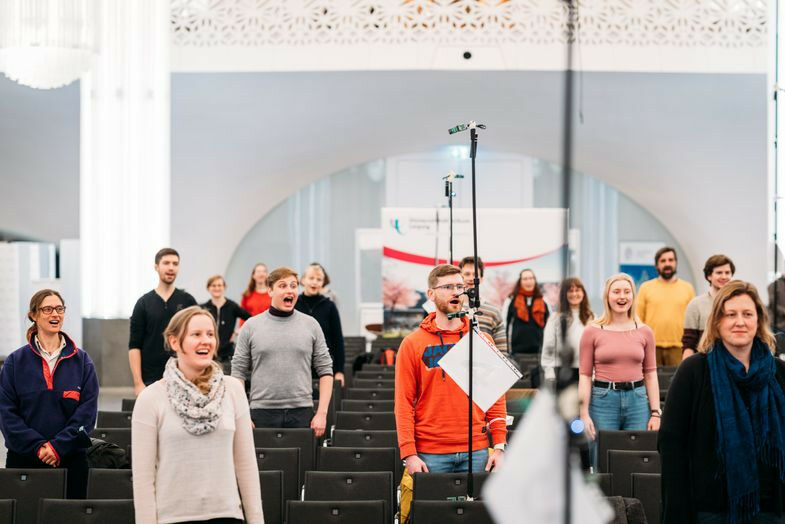 In order to investigate how aerosols, as possible carriers of viruses, are distributed in the room during a choir rehearsal, research teams from the University of Leipzig and the TU Bergakademie Freiberg carried out measurements during choir rehearsals in recent months. The researchers now report on their findings in the Journal of Voice. According to their findings, thanks to regular air exchange and special sensors, choir rehearsals can be conducted in such a way that the carbon dioxide concentration and thus also the aerosols in the room air remain below the critical range for infection.

From the results of their measurements, for example at a rehearsal of the Leipzig University Choir, the scientists from the Center for Musicians’ Medicine at the University of Leipzig derive specific recommendations for action. We recommend that singers do the usual voice warm-up exercises alone at home or on the way to choir rehearsals. Because during the movement-intensive voice exercises particularly many aerosols are exhaled, whirled, and the carbon dioxide concentration rises very fast , explain Dr. Lennart Heinrich Pieper. In principle sufficiently large areas for the common singing are appropriate. -Rooms with a high ceiling and sufficient ventilation possibilities by windows, including skylights, are particularly suitable for the common singing, since aerosols collect first under the ceiling and can be flushed out fast during the ventilation interval. -In general, five minutes of shock ventilation is sufficient-, explains Dr. Pieper from the Center for Musicians’ Medicine. During the ventilation phases, the ventilation area should be as large as possible, which means that all windows should be wide open. -Even tilted windows can significantly extend the singing time-, explains Pieper.

In the case of technical ventilation systems, the fresh air supply should be at the bottom and the air should be extracted near the ceiling. It is also recommended to install a carbon dioxide sensor, which can warn when the critical concentration of carbon dioxide is reached. If it is not possible to install the sensor on the ceiling, it should be done near it, but not on windows or doors. This could falsify the measurement result. Together with researchers from the TU Bergakademie Freiberg, the team developed a kind of formula for safe choir rehearsals. With this formula, the number of people and the size of the room can be used to determine the safe choir rehearsal time up to which singing can take place without a ventilation interval. Michael Fuchs, head of the Center for Musicians’ Medicine, adds: -The carbon dioxide measurement is of course only one component in the context of all hygiene measures to reduce the risk of infection. But it is a very practical one for choirs - and this applies to the Corona virus as well as to other viruses in possible future pandemic situations.

Link to the press release of TU Bergakademie Freiberg.

"How safe is singing under pandemic conditions? - CO2-measurements as simple method for risk estimation during choir rehearsals. Journal of Voice."