Huge pool of heat in the Pacific caused by climate change 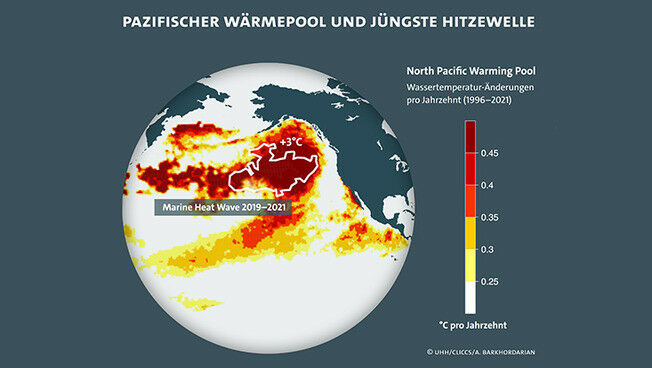 The image shows the increase in water temperature in the North Pacific Ocean from 1996 to 2021 (Pacfic warming pool). The measured values are given in degrees Celsius increase per decade. The white outline represents the 2019-2021 marine heat wave, which is located in the area of the ’warming pool’. Photo: UHH/CLICCS/A. Barkhordarian

A long-term warm water body that continues to warm has now been discovered by a team from the CLICCS Cluster of Excellence at the University of Hamburg. It is three million square kilometers in size, is due to the human-induced increase in greenhouse gases, and favors extreme heat waves in the Northeast Pacific.

Dr. Armineh Barkhordarian now proves in the journal Nature Communications Earth and Environment that this pool cannot be explained by natural climate variations - it has been created by human influence. -This pool of heat will continue to raise water temperatures in the future, leading to more frequent and stronger local heat waves in the ocean. This is pushing ecosystems to their limits-, explains Barkhordarian, an expert in atmospheric sciences. Barkhordarian is a member of the Cluster of Excellence -Climate, Climatic Change, and Society- (CLICCS) at the University of Hamburg.

Barkhordarian’s team shows that the pool has historically promoted localized heat waves in the ocean. One of these phenomena has become known as the deadly -Pacific Ocean Blob- with devastating effects in 2014 and 2015. Ocean productivity collapsed, toxic algal blooms occurred, and high numbers of seabirds and marine mammals died. In addition, the event promoted severe droughts on the U.S. West Coast.

The most recent heat wave lasted a full three years, from 2019 to 2021, with water temperatures six degrees Celsius above normal. Barkhordarian’s team has now been able to prove that this extreme event is directly attributable to the human-induced increase in global greenhouse gases. The probability that such a heat wave would have occurred even without human influence is less than one percent, with a 99 percent probability that greenhouse gas forcing is required.

The study shows that the temperature in the Northeast Pacific has increased by an average of 0.05 degrees Celsius per year over the past 25 years. The region cooled less overall in winter and summer lasted an average of 37 days longer. This resulted in 31 marine heat waves occurring there in the last 20 years alone, compared to only nine from 1982 to 1999.

-Frequent and more extreme heat waves in the ocean are putting dramatic stress on ecosystems. This not only poses enormous risks to biodiversity. It can also lead to a threshold being crossed in marine ecosystems after which recovery is no longer possible-, says Armineh Barkhordarian. -The discovery of the heat pool now gives us crucial information about the likelihood of such events in the future.

To what extent is man responsible? Scientists use so-called attribution research to compare how the world would have developed with and without the influence of humans. In this study, for example, the proportion of heat waves in the ocean that can be attributed to the additional greenhouse gases emitted by humans after 1982 was calculated. This also enables statistical statements to be made for the future.

Wulf Amelung is a new member of the Leopoldina - 24.06
Statement of the University of Freiburg in Reaction to the Activities of the Group ’Transformationsuni 2.0’ - 23.06
Default options facilitate faster carbon offsetting in air travel - 23.06
Related Stories
Earth Sciences
Defects in quartz crystal structure reveal the origin of dust - 24.06

W.E.B. Du Bois  lecture with Samira Spatzek - 07.06
This site uses cookies and analysis tools to improve the usability of the site. More information. |