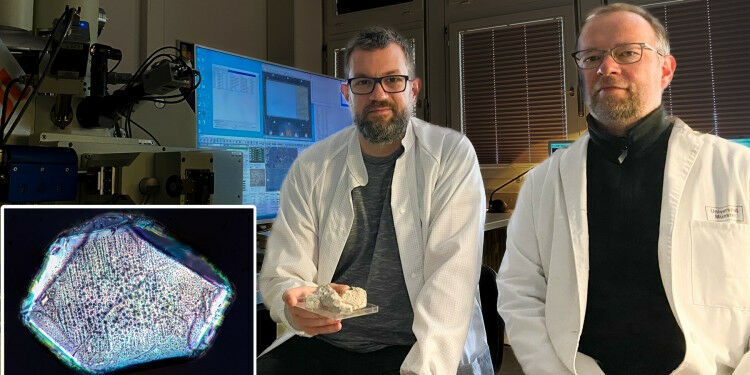 Geoscientists Jasper Berndt (left) and Stephan Klemme present a volcanic rock from Lake Laach. This Eifel rock contains the mineral Hauyn (about 0.5 mm), in which the researchers found the microscopic carbonatite melt inclusions (small picture below left). In the background is the ’Jeol electron beam microprobe’ with which the measurements were carried out. WWU - Institute of Mineralogy

Carbonatite rocks are economically important: The hundreds of known fossil carbonatite deposits on all continents are important storage sites for rare earth metals such as lanthanum, cerium, and neodymium. They are used in many key technologies, including smartphones, plasma and LCD screens, medical diagnostic radiology, wind turbine generators, and electric motors. Despite their economic importance, the formation of carbonatites is insufficiently understood. Scientists at the Westfälische Wilhelms-Universität (WWU) Münster have now demonstrated for the first time that these rocks are formed by segregation from silicate magmas. The study has been published in the journal Nature Communications.

Currently, only the Oldoinyo Lengai volcano in northern Tanzania in East Africa erupts carbonate magma. However, the key to understanding these special magmas lies elsewhere, namely in the Eifel region - more precisely at Lake Laach, a volcano that erupted around 13,000 years ago. Dr. Jasper Berndt and Stephan Klemme from the Institute of Mineralogy at WWU Münster discovered carbonatites as microscopic melt inclusions in volcanic rocks of the Laacher See volcano. These melting debris were trapped in the magma chamber of the Laacher See during the growth of the Hauyn mineral,

The geoscientists were thus able to show for the first time by electron microscopy how a calcium-rich carbonatite magma segregates from a silicate melt deep inside the volcano - much like water and oil, two different liquids that are immiscible and separate from each other.