Insights into the cellular and molecular changes in male infertility 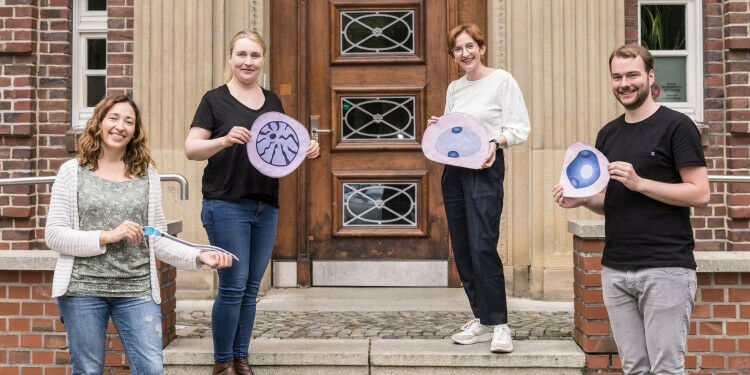 Their analyses enabled a high-res picture to be obtained of testicles (from left): Sara Di Persio, Nina Neuhaus and Sandra Laurentino from the Centre of Reproductive Medicine, and Tobias Tekath from the Institute of Medical Informatics. © WWU - L. Jeremies

"You can’t see the wood for the trees" is a phrase which we certainly don’t associate immediately with the medical examination and analysis of testicles. But in a certain way it applies here, too: testicles consist of many different types of cells, and up to now this complex quality prevented these types from being isolated and then analysed. And this posed problems for physicians and researchers especially in the diagnosis and treatment of male infertility. Dr. Nina Neuhaus and Dr. Sandra Laurentino from Clinical Research Group 326 - "Male Germ Cells" - at the University of Münster want to change this. The project the two researchers are engaged on reveals for the first time - on the basis of the RNA sequencing of individual cells - the molecular and cellular changes in the testicular tissue of infertile men. The authors have now published the data in the prestigious journal "Cell Reports Medicine".

In the ejaculate of a healthy man there are millions of sperm; their formation depends on an efficient stem-cell system. However, in the case of men with cryptozoospermia - a reduced sperm count - there are fewer than 0.1 million sperm present. The natural fertilization of an egg cell is almost impossible with such a reduced count. The resulting diagnosis of "male infertility" is not only distressing for those involved - it also poses a challenge for the physicians treating them. A clear cause is to be found in only just under one-third of such diagnoses. What changes were exhibited by these patients’ testicular tissue - in which the sperm is formed by a differentiation of spermatogonial stem cells (spermatogonia) - was, up to now, very largely unknown. This was, above all, due to the lack of any technical possibilities of isolating and analysing the individual cell types.

For their studies, the Münster research team carried out an analysis of the gene expression of individual cells. So-called RNA sequencing allows the succession of nucleotides in the RNA (ribonucleic acid) to be defined, and in this way cell-specific features and changes in the expression of the genes examined can be detected. By analysing around 30,000 individual cells, the team obtained a clear picture of the spermatogonia. The special feature of the research is a bioinformatic analysis of the individual cells, in which thousands of cells from healthy testicular tissue were compared with those from patients with cryptozoospermia.

"What surprised us," says Neuhaus, "was the fact that in patients with cryptozoospermia, in comparison with healthy patients, the number of spermatogonia is unchanged. However, a change can be found in the reserve stem cells of the spermatogonia." Under normal conditions, she says, the testicle sends around one-half of its spermatogonia into a ’deep sleep’, so as to reactivate them if needed - in order to be able to restore sperm production and counteract any stem cell loss. In the case of any cryptozoospermia, the number of reserve stem cells is greatly reduced. The consequence of this, as assumed by the team, is explained by Dr. Laurentino thus: "The constant recruitment of reserve stem cells probably cannot be maintained indefinitely and may lead to a progressive qualitative and quantitative deterioration of sperm formation."

By making it possible to gain a high-res picture of the testicles of infertile patients, the interdisciplinary study produced by the "Male Germ Cells" research team has revealed the dynamics behind the regulation of the spermatogonial stem cell system. As a result, the study has prepared the ground for a better diagnosis of previously unclarified cases of male infertility.

Small changes - but essential! How peptides are recognised in receptors - 05.05
This site uses cookies and analysis tools to improve the usability of the site. More information. |