Event - May 18
Official presentation of Alexander von Humboldt Professorship to AI ethicist Twenty-one top researchers were the focus of an award ceremony held on Thursday evening in Berlin, where they were presented Germany's most valuable research award, the Alexander von Humboldt Professorship. Among them was AI ethicist Aimee van Wynsberghe, who has been conducting research at the University of Bonn for the past year and a half. During the festive event, Federal Minister of Education and Research Bettina Stark-Watzinger and Hans-Christian Pape, President of the Alexander von Humboldt Foundation, presented the awards which come with up to €5 million in funding.
Career - May 17

National Science Foundation funds project with participation of the University of Bonn with about 2.5 million US dollars

Researchers from the Universities of Bonn and Cologne observe how the danger sensor NLRP3 lengthens itself like a thread.

Social Institute Kommende Dortmund honors ethicist from the University of Bonn . Ethicist Christiane Woopen of the University of Bonn received this year's Wilhelm Weber Award in Dortmund for her many years of social commitment. The prize, named after the theologian and social scientist Wilhelm Weber (1925-1983), is awarded for "special services in the spirit of Catholic social ethics." During a ceremony at the Kommende Dortmund, the social institute of the archdiocese of Paderborn, former federal constitutional judge Paul Kirchhof gave the laudatory speech for the prize winner.

Up to € 50,000 funding for product validations from research findings

Conference on Law as Culture

Käte Hamburger Center for Advanced Study in the Humanities "Law as Culture" invites to the final symposium on May 12 and 13.

What benefits nutrition in Africa the most

More variety in the fields is not necessarily the best strategy, a recent study shows.

The Universitätsgesellschaft Bonn (UGB) presented its prestigious prizes for superlative doctoral theses and its Initiative Award for student involvement during its spring matinée. The ceremony returned to being held in person in the Arithmeum. 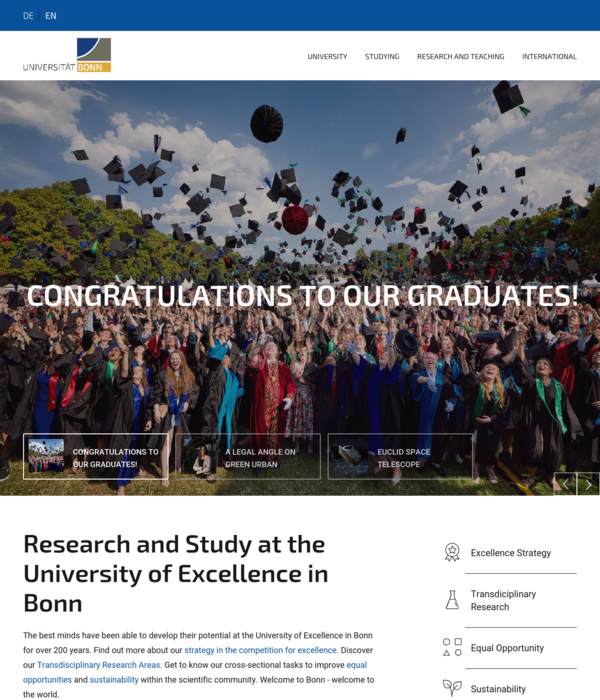